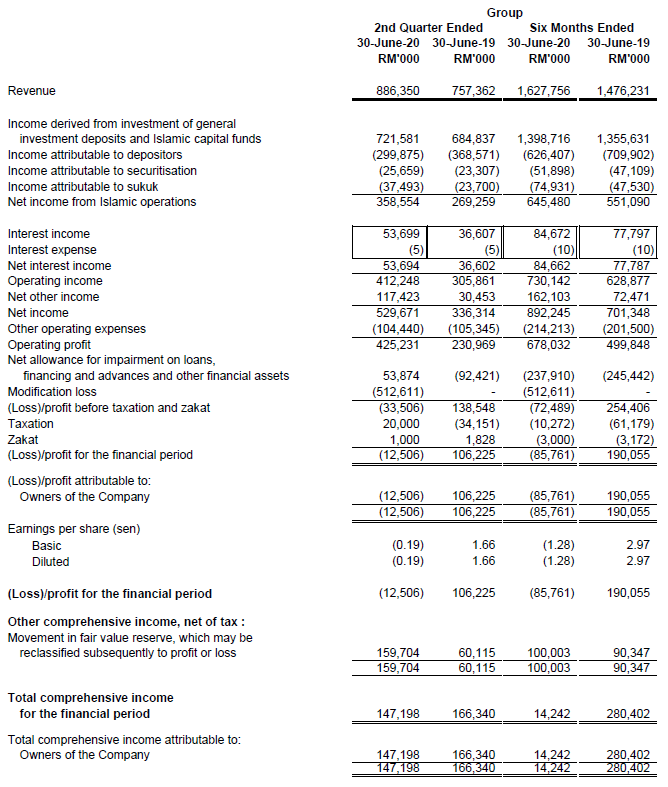 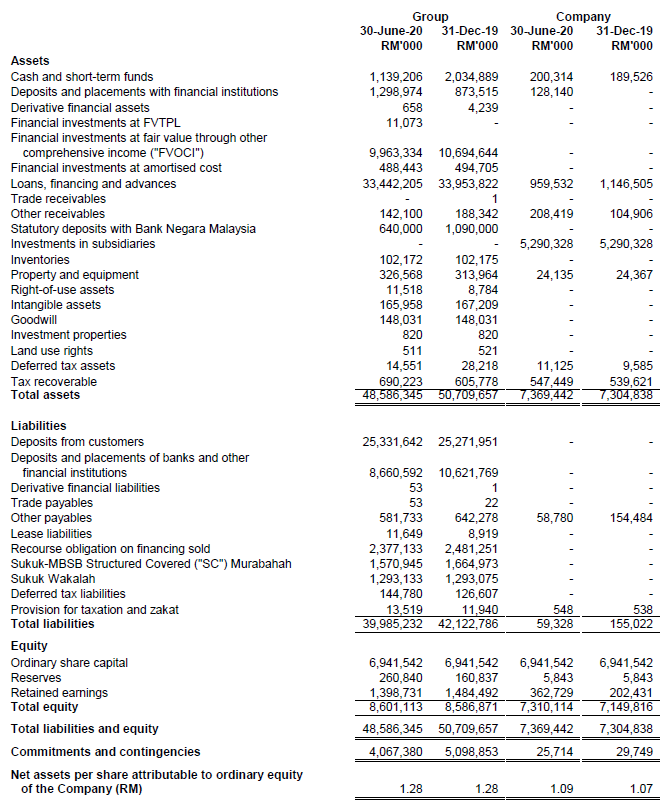 Variation of Results against Preceding Quarter

The Group gross loans, financing and advances increased by 2.0% and decreased by 1.7% compared to 4Q18 and 3Q19 respectively. The increase in 4Q18 was mainly contributed by growth in Corporate financing in line with the strategy to grow Corporate base customers, and also growth in property/mortgage financing.

The performance of the respective portfolio for current year quarter as compared to the previous year corresponding quarter, 4Q18 and previous quarter, 3Q19 are as follows:

Variation of Results against Preceding Quarter

The Group financial investments increased by more than 100% and 9.2% compared to 4Q18 and 3Q19 respectively.The significant increase is in line with the Group's strategy to grow treasury portfolios.

MBSB Bank Berhad ("MBSB Bank") is the biggest subsidiary in the Group. Total assets of MBSB Bank of RM 49.79 bil account for 98.5% of total assets of the Group while the equity accounts for 63.4% of total Group equity.

Brief Overview and Outlook of the Malaysian Economy

Growth in the Malaysian economy moderated to 4.4% in the third quarter of 2019 (2Q 2019: 4.9%), primarily attributed to lower growth in key sectors and a decline in the mining and construction activities. On the demand side, most domestic demand components and net exports registered slower growth momentum. On a quarter-on-quarter seasonally-adjusted basis, the economy grew by 0.9% (2Q 2019: 1.0%).

Public consumption spending increased by 1.0% (2Q 2019: 0.3%). While emolument growth remained positive, expenditure on supplies and services continued to decline, albeit at a slower pace. This is in line with the Government’s commitment to expenditure optimisation.

Monetary Policy Committee (MPC) of Bank Negara Malaysia decided to reduce the Overnight Policy Rate (OPR) to 2.75 percent. The ceiling and floor rates of the corridor of the OPR are correspondingly reduced to 3.00 percent and 2.50 percent, respectively.

The global economy continues to expand at a moderate pace. Latest indicators and the recent dissipation of trade tensions point to improving global trade activity. Monetary easing across major economies in the second half of 2019 has helped ease financial conditions, and is expected to continue to support economic activity. However, downside risks remain due to geopolitical tensions and policy uncertainties in a number of countries. This could cause a resurgence of financial market volatility and weigh on the global growth outlook.

For the Malaysian economy, latest indicators and supply disruptions in commodity-related sectors point to moderate expansion of economic activity in the fourth quarter. For 2019, growth will be within the projected range. For 2020, growth is expected to gradually improve, with continued support from household spending and better export performance. Overall investment activity is expected to record a modest recovery, underpinned by ongoing and new projects, both in the public and private sectors. However, downside risks to growth remain. These include uncertainty from various trade negotiations, geopolitical risks, weaker-than-expected growth of major trade partners, heightened volatility in financial markets, and domestic factors that include weakness in commodity-related sectors and delays in the implementation of projects.

The adjustment to the OPR is a pre-emptive measure to secure the improving growth trajectory amid price stability. At this current level of the OPR, the MPC considers the stance of monetary policy to be appropriate in sustaining economic growth with price stability.

Performance of domestic fnancial markets during the quarter was mixed, largely reﬂecting shifts in investor sentiments and risk appetites amid a conﬂuence of external factors. Despite global monetary easing, worsening trade tensions and concerns on the global growth outlook led to continued heightened risk aversion among fnancial market investors.

As a result, the US dollar continued to broadly strengthen against other currencies, partly driven by investors’ sustained demand for safe haven assets. Consequently, the ringgit depreciated by 1.1% against the US dollar in the third quarter, in line with regional currencies.

The domestic equity and bond markets experienced diverging performances arising from these global developments. In particular, the FBM KLCI declined by 5.3% to close at 1,584 points at end- September (end-June: 1,672 points), while the 3-year, 5-year, and 10-year MGS yields declined by 19.3, 19.7 and 29.5 basis points, respectively. The weaker domestic equity market performance was in with the regional trend, as the heightened global riskline aversion weighed down on most emerging market equity indices. However, domestic bond yields trended downwards driven by non-resident into the domestic bond market as heightened globalinﬂows risk aversion led to a shift in preference towards the holding of safer fnancial assets, such as sovereign bonds. The lower yields were also driven by expectations of synchronised global monetary policy easing. In addition to this, the decision to retain Malaysia in the FTSE Russell World Government Bond Index (WGBI) bolstered bond market sentiments at the end of the quarter.

The reduction in the Statutory Reserve Requirement (SRR) Ratio from 3.50% to 3.00% eﬀective 16 November 2019 will result in a broad-based release of liquidity into the banking system. This will to support the efcient functioning of the domestic continue fnancial markets and facilitate eﬀective liquidity management by the banking institutions.

Development of the Islamic finance industry

This significant growth was partly contributed by the injection of additional Islamic financing assets arising from a merger between an Islamic bank and a non-bank institution in early 2018. Islamic financing to both households and businesses grew by 11.5% and 8.9% respectively, with home financing to households (+5.9%) and financing to large corporates (+4.6%) being the primary contributors to overall financing growth. Growth of business financing to SMEs moderated to 8.9% (2017: 12.5%), in line with the more moderate growth of the economy.

The Group continued its focus to grow Corporate financing during the year, including expanding its trade finance portfolio, and strengthening its capital with the issuance of Tier-2 Sukuk Wakalah in December 2019.

The Group was also active in the treasury segment, achieving a higher treasury income and increased investment in securities during the year.

Overall, the Group financial result for 2019 is satisfactory.

The Islamic industry in Malaysia has advanced rapidly over the years, with a significant proportion of loans and financing in the country being Islamic financing. Islamic banks offer various competitive and innovative products, complementing solutions offered by conventional banks. While the growth is seen as significant in the industry, it is also important that Islamic financing delivers a positive and sustainable impact on the economy and community.

The Group will continue its focus to expand the corporate business, to reach the desired corporate retail-portfolio mix. The Group is looking forward to expand its products and services which include trade finance, wealth management and mobile banking to cater for various segments of our customers and depositors.

Barring any unforeseen circumstances, the Group’s prospects for the year is expected to be satisfactory.